The graph on this page is the same as the one shown in our earlier Member Analysis titled “Let’s turn this State around”, except that the employment growth created by the oil and gas industry has been removed from New Mexico’s figures on this Member Analysis graph. Thus, one is able to see the state’s combined employment growth which took place in other industries. There was no combined, net growth in job-creation among other industries.[i] The 5% job-growth which New Mexico experienced from 2008 through 2014 occurred because the oil and gas industry experienced a 35% growth in job-creation.[ii] What happened in New Mexico’s other industries? 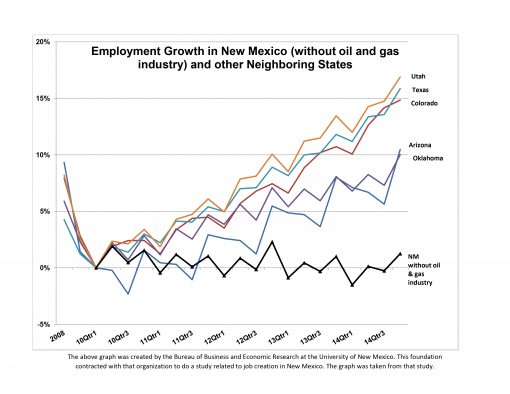 One reason New Mexico has a low rate of job creation is that businesses here often live in an adverse regulatory climate. The experience of the oil industry is instructive. When the present administration came into office there were drilling applications piled-up which had not been processed by the Oil Conservation Division. The new administration insisted that drilling applications be processed expeditiously. Consequently, processing time for drilling applications fell. The result was the job growth shown on the graph on the previous page. Was an effort made to eliminate bureaucratic inertia in the agencies which regulate other industries? Perhaps, but if so, it is clear that the results for other industries were far less successful.

Of course, there are job creation efforts underway in New Mexico. For instance, groups are working to facilitate New Mexico’s role as an “incubator” for new businesses created around technological concepts arising from our federal laboratories and from our universities. We applaud these efforts and encourage their progress. However, the jobs which likely will be created through this endeavor mostly will be suited for an educated workforce. Yet, the educational level of New Mexico’s workforce is spotty. Consequently, much of our effort needs to be directed toward facilitating the creation of low-tech jobs such as those often available in industries such as mining, logging, construction and agriculture.[iii]

Mining jobs exist in New Mexico, but as mines deplete, or close for other reasons, new mines are not being created to replace them. Since the imposition in 1993 of the Mining Act, no consequential mine has been permitted in the State of New Mexico.[iv]

Two decades ago New Mexico boasted thousands of lumber industry jobs. Many of the jobs were sacrificed because of the US Forest Service’s misdirected effort to protect the Spotted Owl. This history suggests another New Mexico job-creation problem. The federal government owns an inordinate portion of New Mexico’s lands. A change in federal government policy, or in a federal bureaucracy’s attitude, can have a consequential effect on job-creation in New Mexico.

Construction often is inhibited by multilayered and unreasonable regulations. Agriculture has been under assault in New Mexico by a court-decreed change in the workman’s compensation law and by misguided environmental regulations, ostensibly, designed to protect mice and minnows.

We need to facilitate the creation of low-tech jobs, but we need also to educate the next generation so it can take more technically demanding jobs. We must move quickly to begin solving these problems. Here is a clue as to the magnitude of the state’s impending, related, future problems: more than 80% of the babies now being born in this state are being born to mothers who qualify for Medicaid.[v]

You will notice that on this Member Analysis’ graph only New Mexico’s employment-growth figures have been reduced by removing its oil and gas industry. If oil industry related job-creation figures also were removed from other states, most of those states also would show lower employment growth results. However, Arizona has almost no oil and gas industry! Yet, it had over 10% employment growth while New Mexico, without the oil and gas industry, had zero job growth. And, as the previous Member Analysis’ graph showed, even with the oil industry growth figures, NM had only a 5% job-growth –- one-half that of Arizona’s. For years, the size of the economies of Arizona and New Mexico were similar. Then Arizona took off, while New Mexico stagnated. What happened?

In order to look forward we must take a look backward. What have we done wrong? Why do we, on the average, have a poorly educated workforce? Why have jobs in former key industries been dying here, while they are being sustained in other states? And, what about the effect of crime on job creation? New Mexico has become one of the nation’s most crime-ridden states. This does not go unnoticed by companies considering New Mexico as a business or manufacturing site.

New Mexico is in dire circumstances. It is clear to us is that half-measures, now, won’t work! The state needs a plan of redemption, and that plan needs to set New Mexico on a markedly different course.

[i] As to the other industries, some, such as the healthcare industry, gained jobs while others lost jobs causing the average job-growth outside of the oil and gas industry to be flat.
[ii] (graph showing job creation in the oil and gas industry)
[iii] These are the industries which once carried New Mexico forward.  Evidence of this fact can be seen in the street names of Albuquerque:  Sawmill, Lead, Iron, Gold, Copper, Coal and Silver streets.
[iv] A potash mine has been permitted, but potash is not covered by the Mining Act.
[v] Report to the Legislative Finance Committee, Dept. of Health, “Effective Practices to Reduce Teen Pregnancy, Including the use of School-based Health Centers,” May 13, 2015, #15-07. See p. 25, “… a 2015 LFC evaluation [found] roughly 80 percent of all births in New Mexico are paid for by Medicaid”